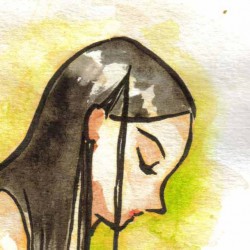 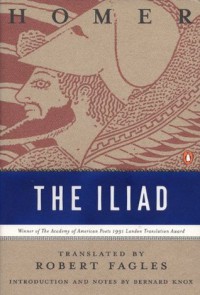 I'm not really sure how I wound up reading this book and loving it. Epic battle story with gory details of spears going through the gaps between your armour or straight through it. Sons going down in battle leaving fathers grieving back home. How a large portion of them earned their name and background mentioned by the fact that they're losing their life. Not my usual cup of tea? You bet. But it also support the fact that sometimes books just surprised you, taking you through a road you didn't know you wanted to take.

So what is it really that enchanted me?

Maybe because the story was told majestically, grandious words worthy of Gods and giant-like-mortals?

Maybe because it's not only a war but also God's war; meddling petty quarrelsome Gods but they were the beginning and the end, the alpha and omega; and no mortals can doubt it. How does it feel, to have this giant enormous shadow of Gods existance hovering above you, constantly sending messages you have to follow, forever getting under your skin moving you like a puppet.

Maybe because I was half in love with Achilles? For most of the story anyway, the part where most people probably despise him. The part where he balked from going to the battle. Is it ironic that in his anger with Agamemmon, I found him having the clearest thought on the futility of war and conquest. This, of course, is a modern mind reading of the situation. We're supposed to see Achilles as betraying his life purpose and his friends. But I couldn't help loving it when he rejected the reconciliatory offer. Eat your gold and go away, I wanted to say. The sin of pride was talking. Then of course a bigger thing than pride came along, grief; and the anger that comes with grief is thousand times more frightening. This is where the half of my love for Achilles just fall apart and crumble.

Maybe because there are so many contrasting things in the story that demanded some figurative chewing and brooding. Mortal and immortal of course, and also how bodies are treated. Those of worthy men's are treated with care, defended even with other life on the stake, fetched away by Gods to be given honour and proper burial. While all around them, bodies bodies and bodies that nobody cares about.

Maybe because I was reading it on holiday, with the sun shining, the sea glittering, and hours of freed mind needed something of this scale to ponder.
Tweet